What a crazy world we live in right now, huh? Everybody was so excited about 2020 being over, and now 2021 is even more bonkers. Well, I’m feeling it, maybe you’re feeling it, and so today, finally we’ve got some news that is a little more light-hearted. Disney World is running out of queue space.

“What in the world do you mean, Disney World is running out of queue space?” you might be asking. It seems to make no sense, right? I mean, Disney World has the same amount of queue space it’s always had and it’s been sufficient. Well, what if I told you that Disney may have quietly raised the capacity limit for guests in their parks from 35% to 40% and they’re finding that they’re stuck because they have no way to make the lines any longer?

Due to the spacing required between each party in queue for an attraction, Disney is currently hard-locked at the current capacity for Magic Kingdom and Hollywood Studios. Even at Epcot and Animal Kingdom, the length of lines is uncomfortable, even if they have a bit more real estate to work with. Consider that lines for some attractions at Hollywood Studios are already having to utilize backstage areas not intended for guests just to handle the distance required for average wait times. At Magic Kingdom, queue lines have become bizarre, winding spectacles with lines for different attractions often having to be side by side.

What this means is that even though Disney would love to increase capacity at the parks and start becoming more profitable with its only profitable segment of the company, it’s hit an impasse. Unless Disney World can open more theaters and/or restaurants, it would seem they have hit a brick wall when it comes to increasing capacity. Either that or social distancing has to be decreased, and there’s a zilch probability that occurs. Disney’s other option is what we revealed months ago, which is that Disney may be considering doing a morning and evening ticket system by summer to try to increase daily capacity. It’s about their only option if they want to increase income.

Because of physical distancing the Kilimanjaro Safaris line uses the Festival of the Lion King queue, snakes it's way through Harambe before making it to the entrance of the Attraction. #AnimalKingdom #DisneyWorld pic.twitter.com/HtHUTk011F

Now, I don’t know about you, but I’d bet Disney would like to be in a financial position where they have more rides to handle higher capacities so they could be making money. But Tron and Cosmic Rewind are almost certainly not opening this year. That tells you something.

Not only is Disney now stuck with their queue lines having been maxed out, but they’ve also become less than trustworthy when it comes to estimated wait times. Some guests are speculating that Disney is highly inflating the wait times once a line reaches a certain point in order to manipulate guests away from certain attractions. Actual wait times for rides like Splash Mountain are often a fraction of the posted times. Is this because Disney has a system in place to discourage riders once the queue reaches a certain length? Is it because Disney has failed to understand queue times with the absence of Fastpass? 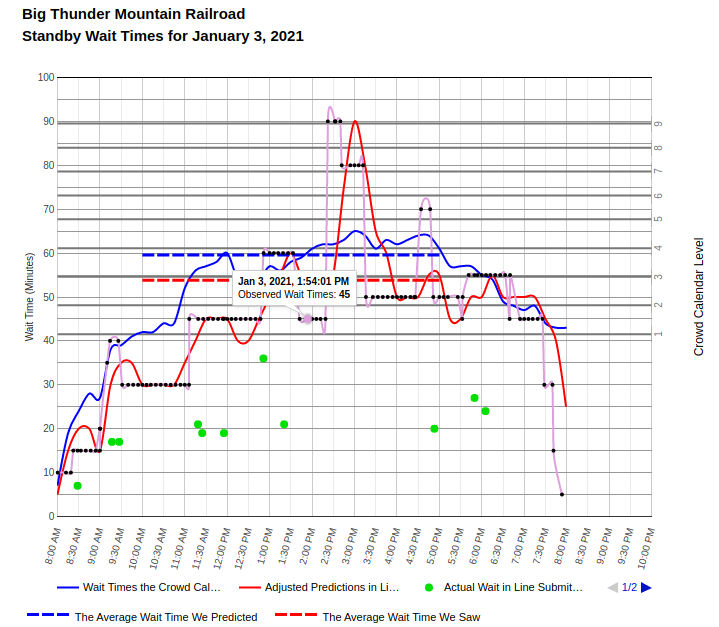 Whatever the case may be, it does appear that Disney World will not be increasing capacity anytime soon. The increases in guests over the past month have already stressed the parks, the guests, and the social distancing guidelines quite a bit. Theme parks just weren’t built with social distancing in mind, and even being outdoors it’s starting to feel a bit cramped. Maybe that’s why Disney is pushing out Project Invigorate, a new series of concepts we believe are intended to improve the guest experience and make guests feel like they’re getting more for their money. We’ll have more information on Project Invigorate down the road as we learn more about it, but just know that Disney has some plans to try to avoid more bad press as the temperatures rise and guests grow weary of lines that start and weave through strange places and spaces.

I got some of my @shopdisney #nuimos order today.

Wanna take bets on whether or not Disney removes T

@mainstreetbella will soon be having a new virtual

You know what I miss? Club Cool! I even miss the

Disney nuiMOs are coming on January 19th to Walt D

My kids really like visiting 'The Seas With Nemo'

I'm really going to miss Splash Mountain when it g

Shifting Focus To Streaming May Pay off For Disney But There’s...

Three New Films Will Premier in Epcot and the World Showcase...